I’ve been in the residential roofing trade for over 30 years and the most common question I’ve been asked is about nails verses staples. What fastener is the best at keeping your roof in place during the forces of nature? 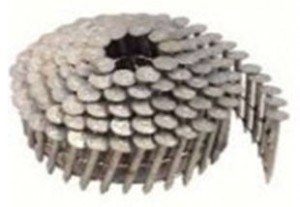 The head of a nail has more surface area then that of the crown of a staple. As for the asphalt composition shingles the larger surface area will help to keep the shingle from ripping through the shingle. The biggest problem with staples is more of an installer issue. I’ve seen staples over-driven which cuts through the material and never has a true hold on the shingle. An under-driven staple will not only not secure the asphalt shingle properly but will also damage the next shingle that covers the staple. On a warm day asphalt shingles are soft and the head of a staple can easily slice through the shingle. Think of it like a cheese slicer as a thin wire can cut easily through cheese and a blunt object takes much more force. Yes nails can be over-driven and under-driven but are much more forgiving than a staple. If the installer slows down and pays attention to what his fasteners are doing then a staple can hold almost as good as a nail. If both fasteners are driven correctly the nail would still hold better just because of the size of the nail head. It is true the staple corrodes faster than a nail but they can both still corrode enough to rot away.

Most manufactures of the asphalt composition shingle do not recommend that the shingles be installed with a staple just because of the installer error issue. In fact, in most cases, if staples are used to install their product then the material warranty will be void. Be sure that you ask your contractor what he fastens the roof with and if he states he uses staples then you might want to verify with the manufacture of your shingles that you will be covered.

My company uses nails to install the asphalt shingles we install. We also use a ring-shank nail to install all of our plywood sheathing. In my opinion the nail is the best when used to install asphalt composition shingles. Be sure that your next roof gets installed with nails and you won’t have to wonder if your roofing material is covered by a manufacture warranty or even worse the worry of blowing off in a storm.

If you can answer yes to any of the following questions then contact us for a free evaluation: